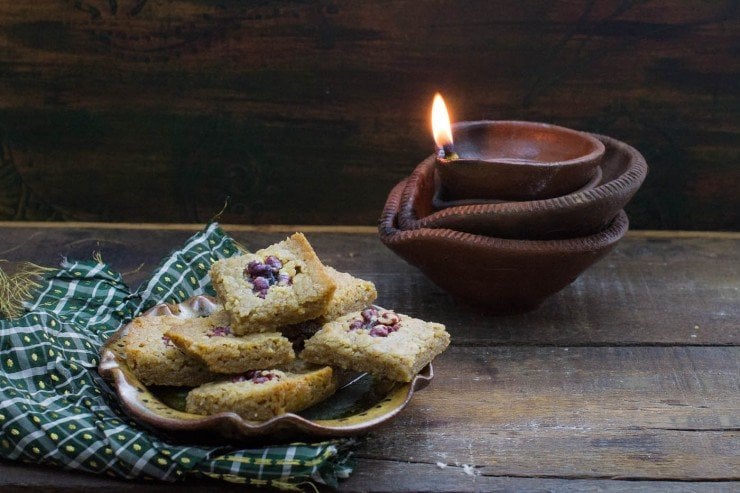 Today is one of India’s most celebrated and well-known holidays, Diwali – The Festival of Lights. Diwali goes on for five days. It is a celebration of the triumph of Light over Dark, Good over Evil. On the lunar calendar, it begins on the day of the new moon, when the waning moon begins to wax– when the light side reappears. 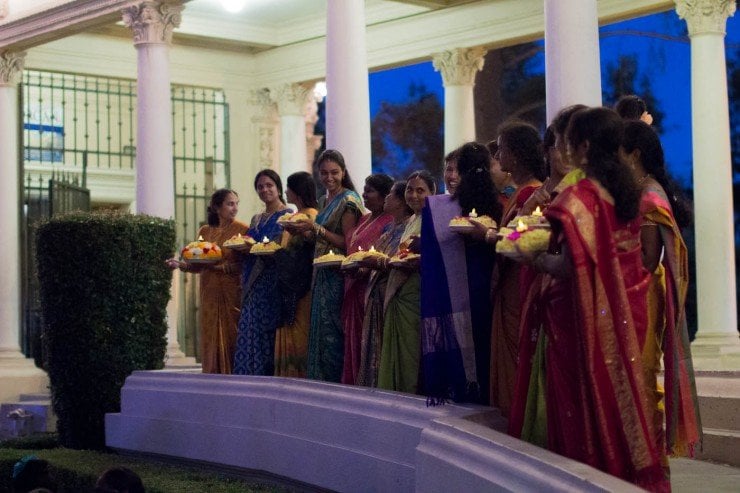 The other day, Puja reposted a picture on her facebook page of various people holding up signs saying “No Crackers!”, “Crackers make Pollution!” What are these “crackers” that people have such a problem with? Firecrackers!

During the five days of Diwali, people are constantly popping off firecrackers all over India. They do it all through the night so it is so difficult to sleep. It is becoming quite a controversy, with one side wanting to celebrate and party and the other side just wanting to get some sleep at the end of the day. The nay side has been bringing up the issue of pollution. Apparently, so many of these firecrackers are set off that there is a significant measurable increase in the amount of pollution in India by the end of Diwali. For the record, Puja and her brother have up fireworks in their early teens because they didn’t want to contribute to the pollution.

Controversies aside, Diwali is a time of great celebration. Many of the rituals have a rebirthing aspect to them, much like a New Years activity. This makes plenty of sense, being built around the renewal of the lunar cycle. And for Gujaratis it makes even more sense because the fourth day of Diwali is Gujarati New Year! (Yep, all of the different states celebrate different New Years).

The first day of Diwali is Dhanterahs. This is the day to celebrate the goddess Lakshmi. Lakshmi is the goddess of wealth and prosperity. People buy lots and lots of valuables on this day, especially gold. In India, between all of those billion people buying gold religiously (literally), it has created such a problem that laws have had to be passed to ration the gold.

In Puja’s family, on the first day of Diwali, her grandmother would always light the “akhand divo” — the unending lamp stays burning until Diwali is over. This lamp can be made from any of many different materials, from the humble terra cotta lamps to nicer bronze and copper lamps. You just put a little ghee, or vegetable oil in the pot and make a wick out of rolled up cotton soaked in the oil and you’ve got a good lamp to burn.

The second day of Diwali is for Kali, the goddess of death, but also empowerment. This takes place on the New Moon, the fully dark night. Just because Kali is about death does not mean evil. Like the lunar cycle, death in Hinduism is just an end of one cycle, to begin again another one. Puja and I are moving this week, and her mom wanted to be sure we wouldn’t start our move on Kali Chaudash, which is fine because we already started.

The third day of Diwali is the biggest. It is actually called “Diwali,” and it is when the biggest celebrations take place. The streets are alive with celebration. Everyone wears new clothes and new jewelry, they do auspicious things like starting new businesses and move into new place and buy houses. Puja and I are right in the middle of our move during Diwali. How auspicious of us!

This is also an important day for Indian businesses. On this day, business people pray to their ledgers in a ceremony called ” Chopda Pujan.” That is something that strikes me funny on the surface. But when you recognize that in Hindu thinking, all of the universe is connected spiritually and everything is a part of the spiritual universe, that includes your ledgers. And as a businessperson your livelihood depends on your ledgers. Diwali is the day you close your books for the year and begin anew.

The fourth day of Diwali is Gujarati New Year. Gujarati’s hold large feasts and gather as families to celebrate. The adults give children money in exchange for blessings– the kids have to touch the old people’s feet.

The last day of Diwali is Bhai Bheej. Bhai Bheej is a sibling holiday similar to Rakhi. For Rakhi, the sister goes to her brother’s house, but in Bhai Bheej the brother goes to his sister’s house for a meal.

There are a few things that really emblemize Diwali– lamps (or candles), gifts, firecrackers and sweets. Indians love sweets and whenever they celebrate there must be sweets involved. This is especially true during Diwali. 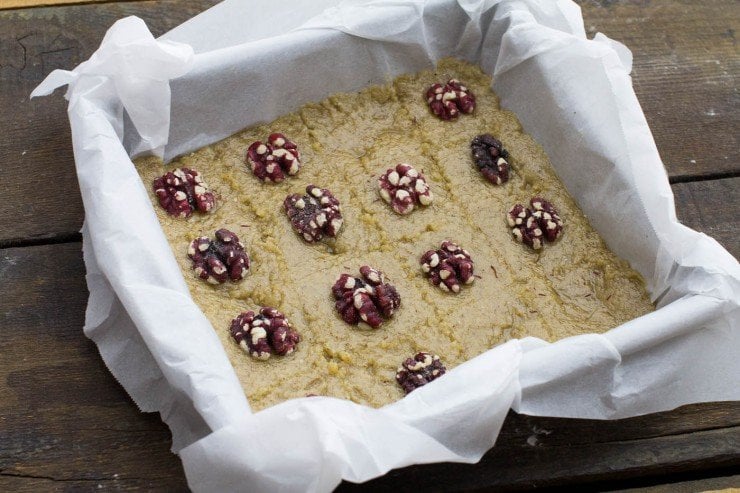 To celebrate Diwali this year, Puja came up with the walnut squares. They are her version of Walnut Burfi. She had found these beautiful bright red walnuts at Whole Foods and didn’t know what she would do with them until Diwali came around.

She created these walnut bars that are reminiscent of the texture of Mohanthal, a traditional Gujarati sweet, but is gluten free and super easy to make. 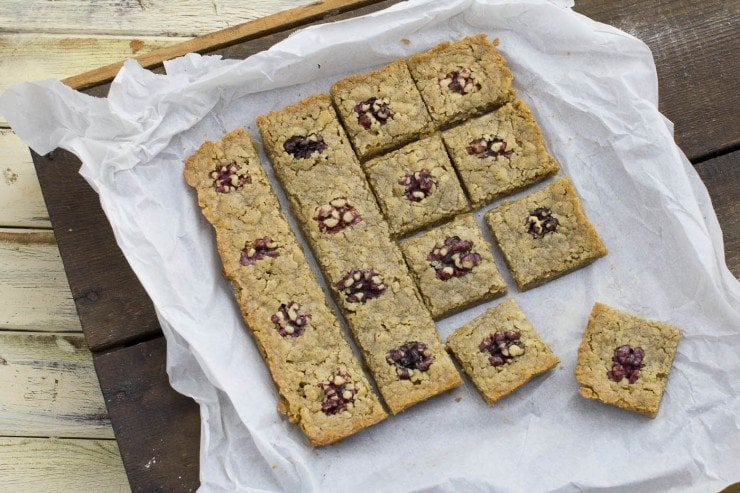 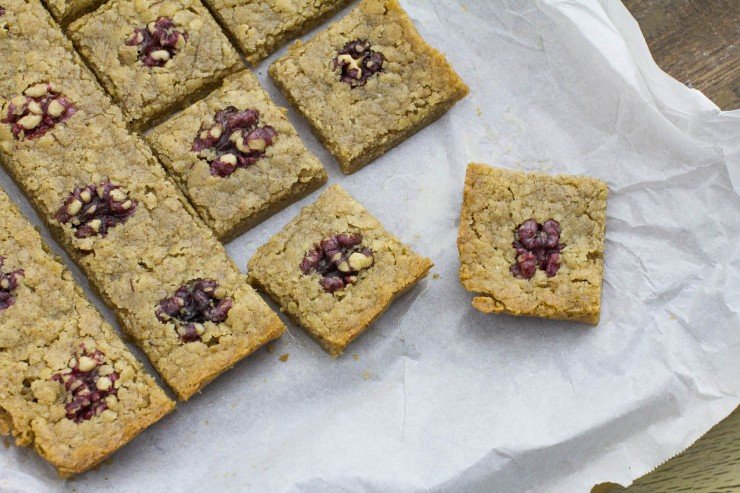 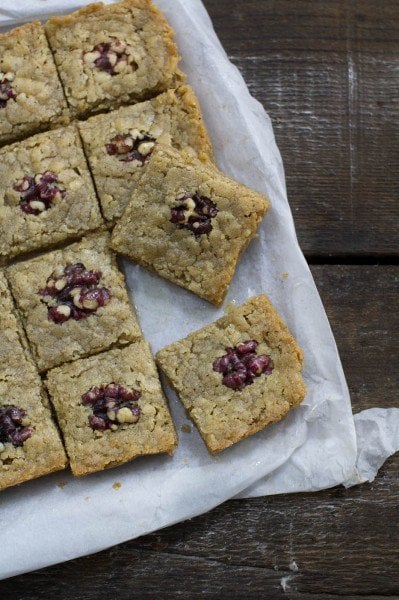 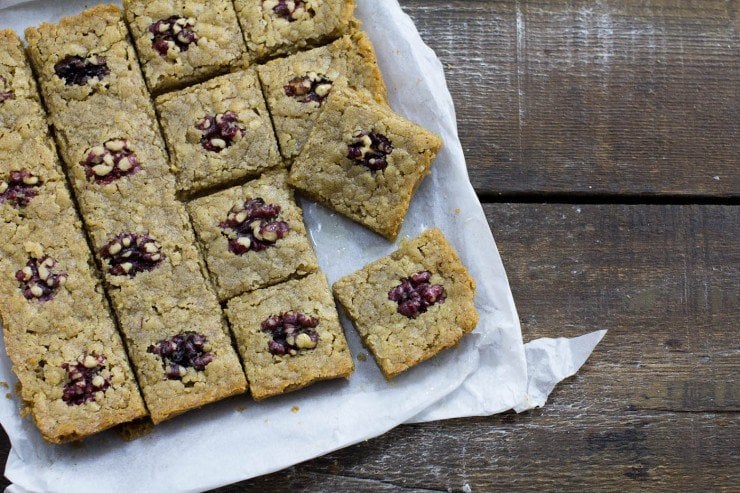 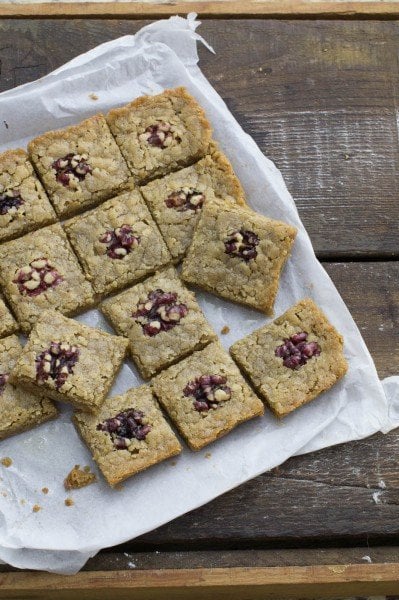 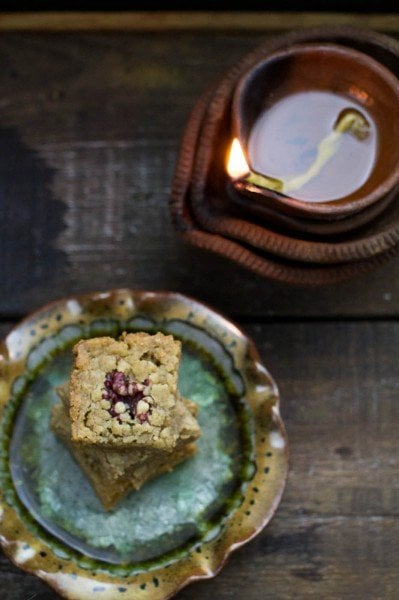 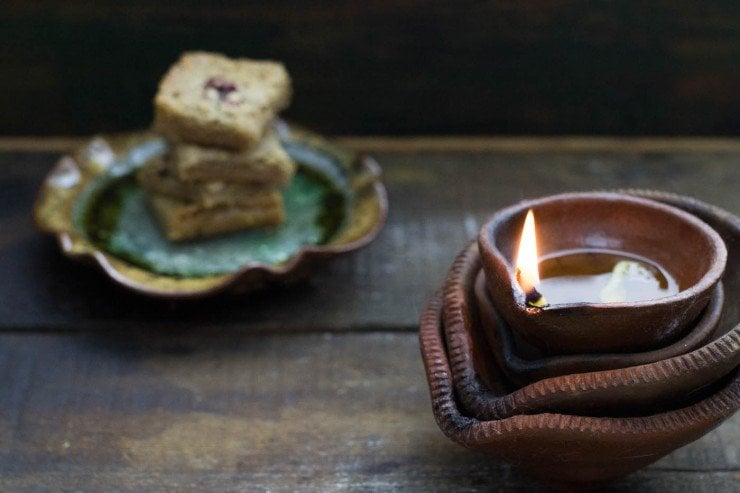 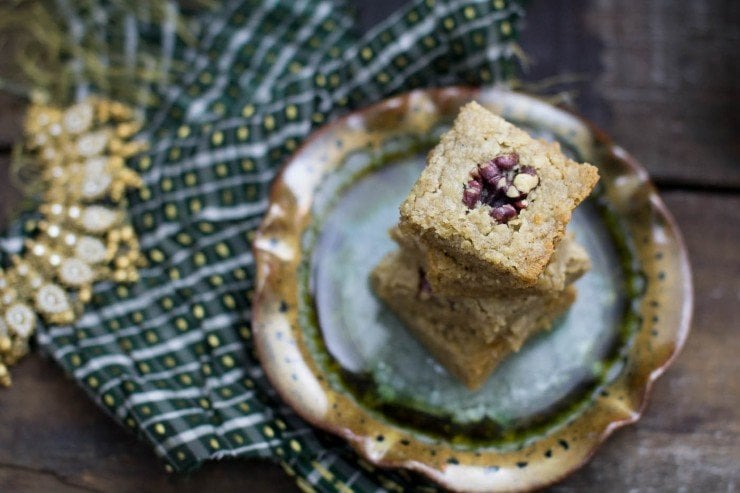 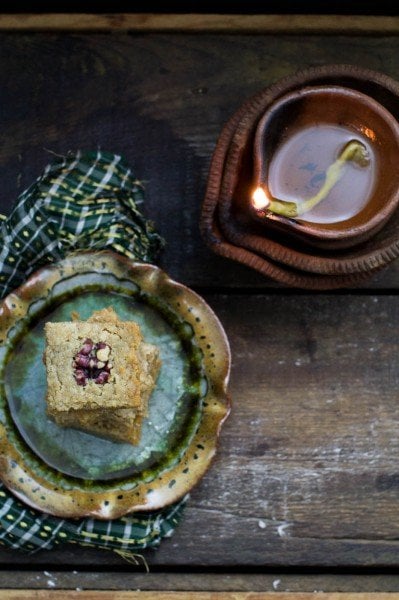 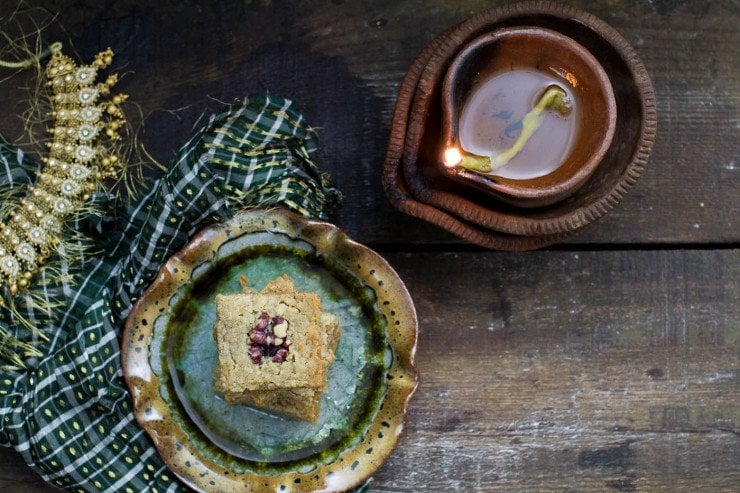 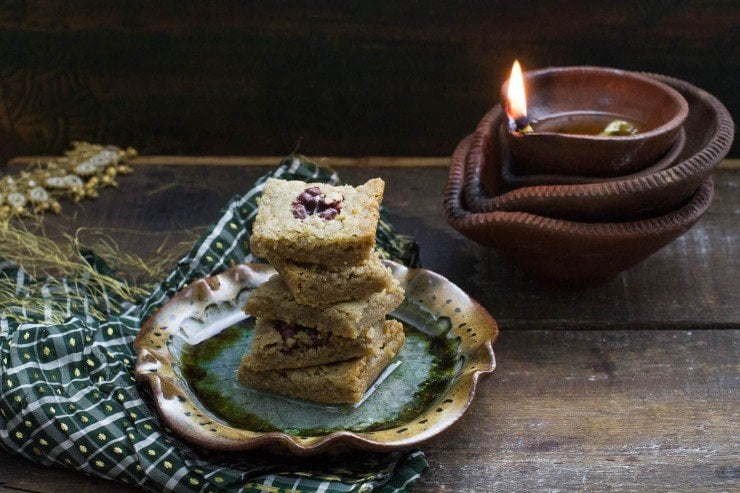 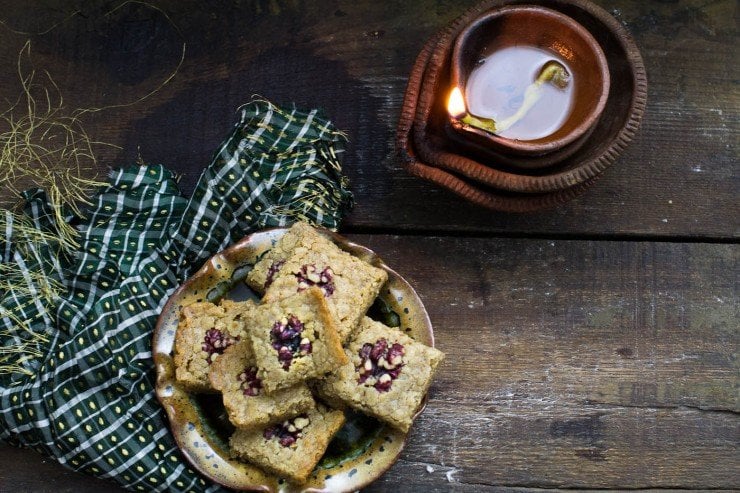 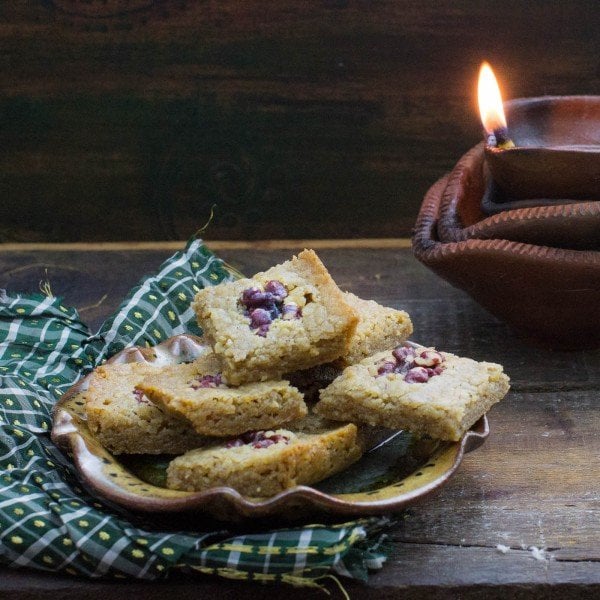 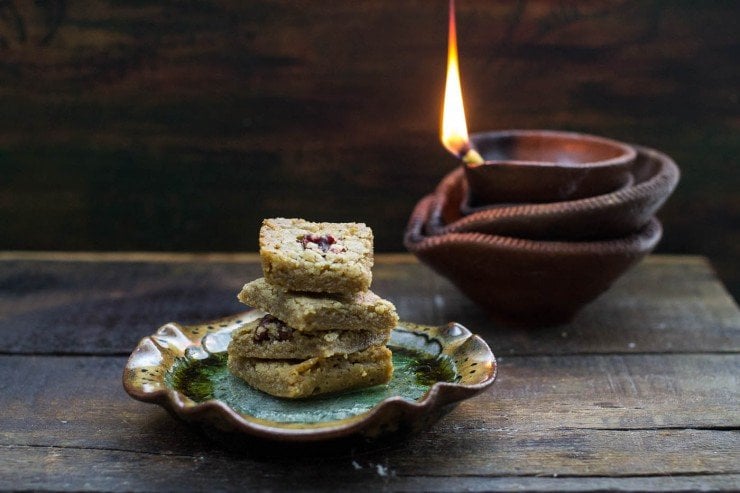 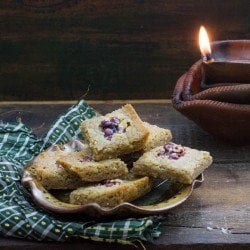