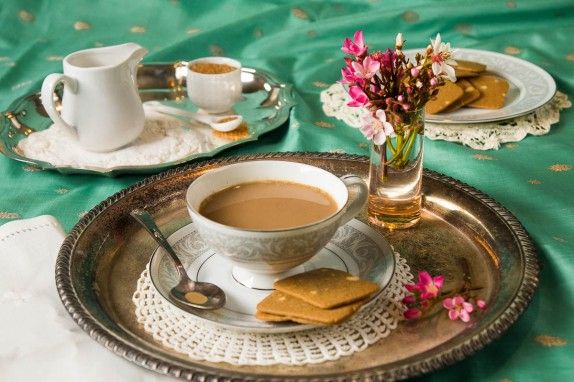 In India, guests are known as “emissaries of god,” they drop by any time they want without warning. When they come, you serve. You almost always serve them Chai. Whenever guests would come over to our house, my mom would immediately ask me to make a pot of chai. “Chai” is the Hindi word for “tea” but it usually means the well-known sweetened spiced milk-tea of India.

Chai is ubiquitous in India. It is the perfect drink for India’s hot weather because the hot tea triggers the body’s natural cooling reflexes and actually helps bring your body temperature down. Most Indians drink Chai at least twice a day, once with breakfast and again for an afternoon tea, just like the British. As it turns out, the British foisted tea on Indians not only as a way to sell tea, but also sugar.

Not surprisingly, the tea industry was brought to India by the British. Some of the best tea in the world grows in Darjeeling using tea and techniques for growing that the British East India Company stole from China in the 19th century. 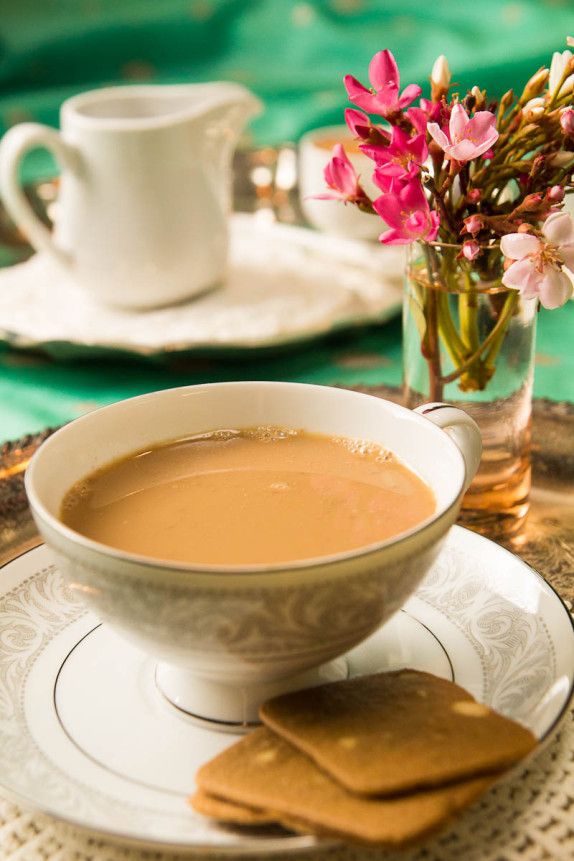 It is an accident of history that at the time the British stole tea from China in a great act of industrial espionage, they also had a glut of sugar which they wanted to push as well, leading to Chai.

Chai is served on every street corner and on crowded train stations at all times of the day or night. In Bombay, chai is made so strong that the standard serving is “cutting chai,” a half glass of chai made strong enough that a half serving is plenty. If you want a full glass of chai, ask for a “double cutting chai”.

It is quite a sight to watch a street side vendor pour a cutting chai. They take one full glass of chai and one empty one. The chai is poured back and forth from one glass to another a few times from about 3 feet up and split equally between the two glasses. And amazingly not a single drop is spilled. This also helps to bring the chai down to drinking temperature.

Indians typically serve tea in their homes several times a day. India is the world’s second largest producer of tea and 70% of it is consumed within India. By April this year, chai will be officially declared the national drink of India. And as anything else in India, chai recipes vary by region. My family makes a variety of different chai recipes but this lemongrass masala chai is definitely a mainstay. In fact, lemongrass is known as “green tea” in Gujarati.

When I was growing up, my parents had an open door policy in our home. Which basically meant we had people dropping by to visit all day long. That meant I had to make a lot of tea as a kid.

I tend to have a very American perspective on guests. I love to have them, but please call first. So as you can expect, having to make tea three or four times in a day for unanticipated guests got pretty annoying to me as a teenager. It often felt like some people made it a point to stop in a few times a week just to drink a cup of tea. I was annoyed, but my parents were always warm and welcoming. They are much kinder human beings than me! 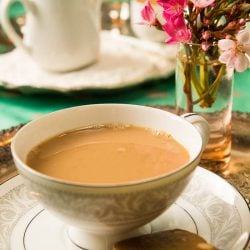 The traditional ratio for milk to water is half and half. So if you are using full fat milk, use 1.5 cups water and 1.5 cups milk. For a stronger cup of chai, add 1 more teaspoon of tea leaves. Feel free to add any of the following to your chai: mint leaves, ginger, saffron, orange zest, holy basil, black pepper, carom seeds (ajwain), star anise or any other spices or herbs you might want to try. Check out the recipe for my mom’s chai masala.