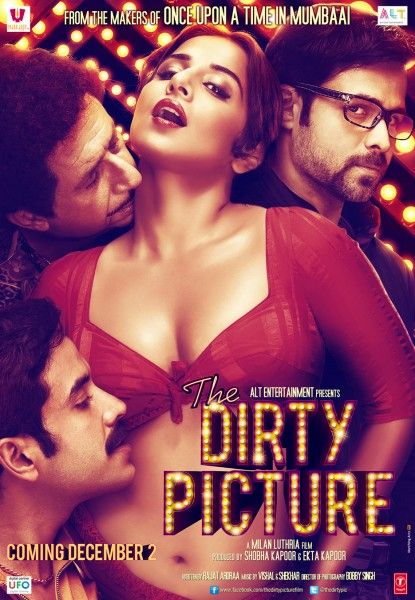 “Is she vamp or victim?” the gossip columnists Nayla asks, “which should I label her?”

The Dirty Picture is based on the true story of South Indian softcore actress, Silk Smitha, who attained great popularity in the 1980s. She succeeds in the film industry by being neither fully in control nor fully controlled by the system. She is neither calculating, nor victim to the image created around her. She is being led by no one and succeeds in spite of the industry big wigs.

Some people look at the role of Silk Smitha as someone to be looked up to by women in India. She was an empowered character. She used her sexuality the way she wanted to, sometimes as currency, sometimes for her own pleasure. Most importantly, she didn’t care what society would say about her.

When gossip columnist, Nayla, decided to label her a “vamp” and to condemn her in the newspaper for all of India to judge her, Silk showed up outside of Nayla’s birthday party and stole the spotlight. She outshined the columnist herself, and the movie star, Surya Kant (Naseeruddin Shah). Silk took on the establishment, and seemed to be winning on her own terms.

Many of Silk’s movies were considered “softcore” or “adult” in India, hence the name of the movie, The Dirty Picture. But they were exceptionally tame by Western standards. The true offence of them was not the appearance of skin, which was not more explicit than the item numbers of most Indian movies. The true offence was in depicting female sexuality. The heroines of these adult movies might pursue men, or otherwise violate the sexual mores of the culture. As Narya put it in the film, “Today you are a rebel (a bad thing), tomorrow you will be seen as our freedom. Stay as you are,” she tells her.

Aside from Silk, I found Nayla to be the most intriguing character in the film. We learn very little about her personality, but we do learn a lot about how she operates. She is a gossip columnist with all of the power of an establishment figure. She attacks Silk ruthlessly, but she sees this as a good thing for both Silk and for what Silk represents. The more she attacks Silk, the bigger Silk becomes.

Of all of the people in the film, Nayla is the most calculating. Often in the struggle for women’s rights, women create the biggest obstacles, with some of the most abusive voices calling for complacency coming from other women. But Nayla’s character is not easily classified as good or bad, it’s even hard to say for sure if she is part of the establishment. After all, she was the one to stand and clap at the awards ceremony. She was the one to tell Silk to keep going.

I also liked the storyline of Abraham. Abraham represents integrity in filmmaking. He was the director early on who did not want Silk in his picture. He actually cut her out of the film, causing his film to bomb. He was the first of many to reject her as trashy. But his ambitions were toward making art films (what this movie calls “Hollywood”). He represents the intellectual in filmmaking. But intelligence doesn’t sell films, “entertainment” does. It was fitting in the end, that he would ultimately give in to the need for entertainment, saying he was falling asleep at his own movies.

The movie was mainly upbeat, but this is a tragic story. Silk’s downfall wasn’t so much that she became a hopeless pariah of the film industry, but that her public seemed to let her down as well. She wanted the spotlight because she sought love. She thought if she had enough fanfare, she might feel loved. But when she achieved that kind of fandom, she learned that being worshipped was not being loved.

Comments on "The Dirty Picture"