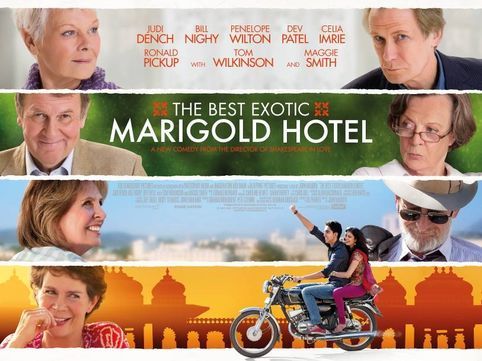 Ambitious young Indian, Sonny Kapoor (Dev Patel), wants to resurrect his father’s dream of restoring a grand hotel in Jaipur (the capital of Rajasthan, India). His idea is to take this inherited property, which he calls with great enthusiasm “The Best Exotic Marigold Hotel”, and make it a luxurious retirement destination.

The movie does a good job on Sonny’s story (Sonny loves Sunaina, his mother wants him to have neither Sunaina nor the hotel), but it is really about the 7 British visitors, played by Judi Dench, Maggie Smith, Tom Wilkinson, Bill Nighy, Penelope Wilkinson, Celia Imrie and Ronald Pickup. A tragic irony of the hollywood system is that when actors become masters of their crafts they also become too old. They are too often relegated to supporting roles, significant parts for them are rare. So an ensemble piece such as this, focused on an older age group is a rare gift.

Each character has their own reasons for going to India. Most of them are in hard financial straits for one reason or another and India promises them a way to live the life they are looking for. The exception is Graham (Tom Wilkinson) who lived in India as a child and has carried around a great pain in his life he wants to make right.

Each character experiences India in their own way, Muriel (Maggie Smith) and Jean Ainslie (Penelope Wilton), doing their best not to experience India at all. India eventually gets to Muriel, but Jean has dug her heals in and made sure she would be miserable no matter what India tried to offer her.

As we were leaving the theater, Puja said she was impressed because they got the cultural references right. Too often movies are full of sloppiness toward other cultures that irritate those in the know like claws on a chalkboard. (The worst offender I can think of being Indiana Jones and the Temple of Doom, which purported Indian dishes of snakes, large beetles, eyeball soup and chilled monkey brains, a pure fantasy of the filmmakers imagination, leading to a generation of people frightened to try the cuisine).

The Best Exotic Marigold Hotel is a great movie for people who are interested in India, as this movie does a better job of portraying the country, than say The Darjeeling Limited, for example. I also think anyone nearing retirement age or above would also be greatly interested in this film, regardless of their interest in India.