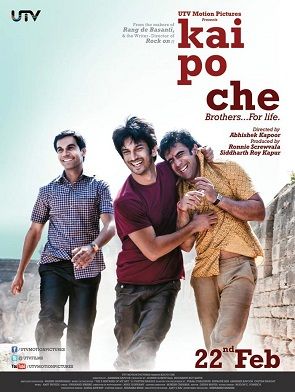 The Bollywood system is quite powerful and moneyed, often relying on old formulas for the movies it produces for a pretty good guarantee of profit. However, in recent years there have been more and more attempts made to go beyond this, to present social messages in meaningful ways. Kai po che! makes a pretty heartfelt effort at doing this, without falling too deeply into melodrama.

At its heart, kai po che! is a story about three close friends trying to make it in life. At the beginning of the movie they want to build a sports academy for kids, which they have partnered up on. Ishaan (Sushant Singh) is the hopeful character, the most passionate having once been the town’s star cricket player. Govind (Rajkummar Rao) is the practical minded one of the group and Omi (Amit Sadh) is the politically connected one. Much of the movie is about Ishaan working with cricket prodigy, a Muslim kid named Ali (Digvijay Deshmukh), who Ishaan has high hopes for as a way to build the academy.

But things take a turn when the 2001 Gujarat earthquake happens, their building is destroyed and the three are now deeply in debt to Omi’s uncle. They lost the big academy they were building and with it their ability to make good on their debt. This is when the movie gets interesting because it shows how real life events mixed with Indian politics affect real people. These three wanted nothing to do with politics, and tried to stay out of Hindu-Muslim conflicts, but were sucked into it.

I’ve been trying to pin down why it’s so hard for me to engage with this movie. Aaron Hillis of the Village Voice wrote, “In the nearly two hours before the climax—when the real-life Hindu reprisals add savagery and tragedy—the dramatic stakes are so puny that every obstacle can be overcome with a simple work-it-out montage, a cheap device prevalent enough in this movie to start a drinking game.” It’s a statement I’ve been grappling with for a while. On the one hand I think it explains why I couldn’t really engage with this movie. The movie just doesn’t go deep enough into the conflicts and set backs these characters experience. On the other hand, these guys are just trying to follow their ambition dealing with lighter, everyday problems but then they’re hit by the heavy reality of the Hindu-Muslim riots. But that’s the point. You can’t escape the broader conflicts of society.

I struggle to really pin down why I didn’t connect to this movie emotionally the way others have. My mother-in-law recommended this movie, and Puja liked it, as did a couple of friends I talked to about it after watching it. I feel like this movie in particular seems to have a special resonance with Indians. Is it because of the language barrier? I find any foreign language films more difficult to latch onto emotionally because reading subtitles pulls my eye away from the characters and their expressions. But it can’t be just that, because I have enjoyed many foreign language films. I think the main problem is that I lack a visceral connection to historical events that are so central to the film. I would still recommend this movie to anyone who is interested in an unromantic version of India, but I will continue to search for better films along these lines.

Note: Although our ad networks may show related links, we are not sponsored or otherwise endorsed by Netflix or the creators of Kai Po Che!