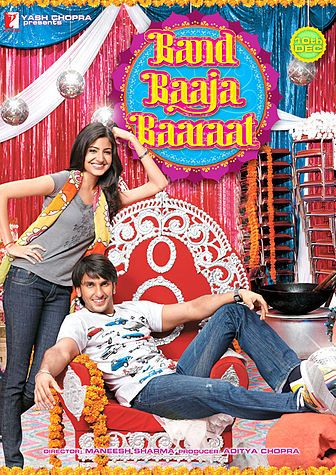 Perhaps to us Westerners, India is best known for it’s outlandish weddings full of bright colors, bright lights and many days of dancing, partying and celebrating. It should be no surprise that many of the best movies to come out of India have to do with these great parties.

I try to get Puja to recommend Bollywood movies to me that are something else. I’m looking for diamonds in the rough. But she keeps recommending her favorite studio movies. Band Baaja Baaraat is one of those. On the other hand, the very reason she likes it is that it reaches beyond what the studio system normally creates. In fact, India right now seems to be going through a sophisticating period (as opposed to American films which are doing just the opposite). Band Baaja Baaraat fulfills all of the fun and fluff and excitement and joy of studio movies, while making social commentary and busting conventions without dwelling on them.

It starts with your standard failed flirtation setup, as the lead male, Bittoo, cons his way into a wedding in order to eat the wonderful food. Shruti, an assistant wedding planner who is working at the wedding, sees through Bittoo’s con and tries to throw him out. As a good (but harmless) con artist he manages to talk his way into staying, but not by convincing Shruti he belongs there. She is too smart for him.

After the wedding, Bittoo uses his smooth-talking skills to track Shruti down, proceeds to flirt with her on a bus but things don’t go well for him. He gives up, but soon after, he and Shruti decide to go into business together as wedding planners. At this point I was pretty sure the movie was going to turn into an Indian version of “The Wedding Planner,” one of J-Lo’s oscar-worthy films (catch the sarcasm, please).

Fortunately, it did not. Here is where the movie got interesting, because Shruti and Bittoo achieved success with their business, “Shaadi Mubarak” (Happy Wedding). What we saw was class-climbing. Shaadi Mubarak went from doing humble, small time weddings with low budgets, to big budget productions for the very wealthy. The partnership between Shruti and Bittoo was a success because they worked well together. And there was a little role reversal here, because Shruti always seemed to have more control over the business.

Bittoo was an equal partner in Shaadi Mubarak, but if either of them were slightly more Assistant than Boss, it was Bittoo. At one point, we even learned that Shruti made horrible chai. In a lesser movie, this might symbolize that she would not make for a good wife. In this movie it was almost a signal of strength. It showed she was good at running her business. She was meant to be successful in business and the movie never for a minute suggested that this was a bad thing.

There was a real undercurrent of class struggle to this movie. A major challenge for Shruti and Bittoo was to escape their small town thinking in order to understand their clients. Here is where I learned the word dhinchuk, which the subtitles kept translating as “kitsch.”

Puja said kitsch isn’t really the right word, it was more like flashy. But it was flashy in a way that both Shruti and Bittoo saw the problem with it. Bittoo’s strength was always in showing restraint and being “classy,” which helped them achieve the wealthier clients. Shruti’s strength was in the flash, which gave the weddings size and heft.

The movie eventually went down the journey you would expect, it had to. The business relationship could not be kept purely business. Shruti eventually agreed to an arranged marriage and I’m avoiding sticking the spoilers in here, but you can guess what happened. But you knew that from the moment the two made their business agreement and the two promised to never let any romantic feelings occur between them lest it interfere with the business.

If you are looking for a good Bollywood movie to watch, I would recommend Band Baaja Baaraat. It has all of the elements of a Bollywood film: the excitement, the energy, the music and dance sequences with the flashy lights and colors. But it also has the heart you look for in a film, as well as a touch of edge and social commentary.