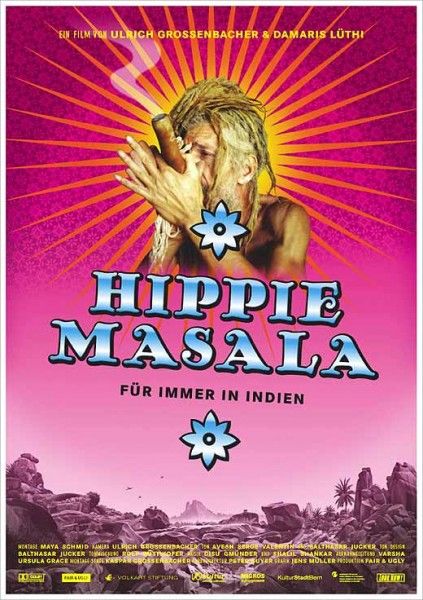 In the 1960s, many Westerners flocked to India on a spiritual journey. Most left after weeks or months. Hippie Masala is about the ones who stayed.

The sixties were such a defining period in American history, sometimes it’s easy to forget that it was a movement that happened worldwide. The hippie counterculture really peaked, as many in the Western world searched for a new kind of spirituality apart from or in addition to the Judeo-Christian constructs. Famously, one place people turned to for guidance was India.

India has always been a welcoming place for spiritual exploration. Diversity of religion has traditionally been welcomed rather than resisted. In India, there are many offshoots of Hinduism and other religions, groups like the Hare Krishnas are not seen as weird or as outsiders, but are appreciated for their attempts at finding a spiritual truth. India has been the birthplace of many religions, from Hinduism, to Buddhism and Sikhism, Jainism, and thousands upon thousands of religions that can be thought of as spin-offs or expansions of these religions.

Hippie Masala follows 6 people who came to various parts of India in the 1960s. Cesar from Italy, Hanspeter from Switzerland, Meera from Belgium, Erica and Gillian from South Africa, and Robert from the Netherlands. What has become of their lives is as diverse as their backgrounds. Cesare and Meera stayed the most true to their journey, both pursuing spirituality full time. Cesare is a sadhu (a religious ascetic), Meera would like to be one, but the culture of India resists her journey at every moment because she is a woman.

I’m not sure what Erica and Gillian are doing in the movie, except perhaps to show contrast with all of the others. They are the most unenlightened. A couple of judgemental drunks living in Goa and running a beach fashion business. They describe having tried living in various places in the world before India, such as Brazil, where they were bothered by the people, such as the lesbians.

I found Hippie Masala to be less of a fact-based documentary, and more aimed at creating an overall feeling. It was slow to provide you with factual details, such as the location of a place, or even the name of the person they were speaking to. That just wasn’t the point of the movie. It seemed more interested in conveying the emotion and spirit of the life of these six people.
In another sense, Hippie Masala was a travel movie. There were a lot of clips of people going about their lives, women carrying water, crowds hustling and bustling. But it won’t give you the view of India most of us think about. It isn’t about city life, but about the life of these Westerners who have settled to a life on the fringes.

I asked Puja if she had a connection to any of the stories in movie. She pointed out just a few things– the unhappy wife, whose life is all about serving her husband. Puja said that is a fairly typical story for Indian women, where marriage is more about servitude than companionship. She also pointed to Meera’s struggles to gain enlightenment. Meera had a guru who didn’t seem particularly interested in her. She excused him as being old and on his way out, but since he died years ago she has not been able to find a replacement. These are struggles that belong to women alone in India.

Hippie Masala doesn’t attempt to fill your head with big ideas or to outrage you or make you sad. It is just a portrait of these various people. I really liked the depiction of Hanspeter, the farmer, milking his cattle. At one point he is milking his cattle and his cats are behind him crying for milk. He sprays the milk directly from the cow’s teat several feet into the mouths of the waiting cats.

The painter, Robert, was also a beautiful story. He came to India and fell in love and married. He creates emotive paintings that incorporate Hindu themes. For example, one shows a man looking worn out and grief-stricken as he stands by a beautiful tree. It seems to be a depiction of his own grief after the death of a dear friend. The roots of the tree lead down to a tumultuous world below the surface– dark creatures and the fiery goddess, Kali, ruling over the darkness.

The strength of Hippie Masala is in depicting India to those of us who haven’t lived there. That said, if you are looking for one definitive travel movie to teach you about India, I would not choose Hippie Masala. But if you already have a general understanding of India, this is a great movie to see a less often viewed side of the country.