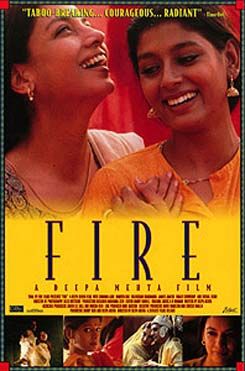 Fire was the first Indian movie Puja ever showed me. It was her way of introducing me to some of India’s cultural issues that mean so much to her.

In 1996, Fire was an extremely controversial film. Fundamentalist groups in India overran movie theaters, destroyed movie posters and forced moviegoers to leave while making sure the movie houses refunded their tickets. In the U.S. we would have no similar response, but the topic was provocative even by U.S. film standards of the time*. The reason? Lesbianism. It’s a topic that still titillates today. Only last year, the sex in “Blue is the Warmest Color” was talked about all over, marketed as if that were some new and shocking thing, and it was a French film.

It is all too common for society to criticize the depiction of female sexuality. As in my recent review of “The Dirty Picture,” I would argue the problem fundamentalists had with this movie wasn’t the lesbianism itself, but the idea that a woman might have a sexual inner-life. That she might have desires of her own.

I can see how a lesbian relationship depicted in a film would rise the passions of fundamentalists. It attacks the fundamental views of marriage and family in the way that it is practiced in India. But I would insist that the movie was not even about that, but about these women finding a path to find themselves through their own desires. This is particularly true when you consider Radha, whose husband is pursuing a spiritual path. She asks him, what is her duty? He says it is to support him. She is otherwise shut out because women are not encouraged to seek spirituality the way men are (see Hippie Masala).

But Fire isn’t really about lesbianism and it is definitely not about lesbian sex. There is some depiction of the act but it is brief and decidedly not titillating. Fire is about desire and the cultural repression of desire.

The two main women in this movie are Radha (Shabana Azmi) and Sita (Nandita Das). They are sisters-in-law, disregarded by their husbands for separate reasons. Sita’s husband, Jatin, is in love with a Chinese woman who he would rather have married instead but she would not accept his family’s joint way of living. Radha’s husband, Ashok, is pursuing a spiritual path. Radha is infertile and Ashok’s guru taught him sex is good for only procreating, and since his wife is infertile, procreation is off the table and he should repress all desire.

In contrast, Sita pays little mind to the conventions of society. When she realizes Jatin is having an affair, she encourages him to go see his mistress. She doesn’t want him around anyway. In one comical scene, Jatin argues with Ashok because, while not saying it explicitly, Jatin wants to go see his mistress. Sita, Jatin’s wife, joins in the conversation and says he should go see her. Jatin becomes offended by this, “Why should you want me to go out?” he asks. Sita has flipped the tables by showing him the same disregard he shows her, and he can’t seem to handle it. A wife should be worshipping at her husband’s feet, not permitting him to go see his mistress, no matter how poorly he treats her.

I don’t think of Fire as a love story. I don’t know that Sita and Radha were necessarily in love. But they were offering each other another life, one where they each mattered, where their desires were considered. Sita decides to reject the pressures of society to submit and to suppress all personal desire. Her attitude soon influences Radha, who comes to figure out that she does not need to suppress her desires. Radha’s husband, Ashok, notices the change in her and scolds her. Sita is young, he says, she will learn, but Radha, in his view, has no excuse. Later, Ashok and Radha argue:

Fire is part of a trilogy known as “The Elements Trilogy” by writer and director Deepa Mehta and is actually a Canadian film, in English, although it was shot in India with Indian actors and shown in Indian theaters. The others in the trilogy are Earth (1998) and Water (2005). I plan to watch and review those as well very soon.