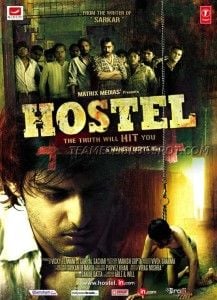 Hostel is probably the first Indian movie I’ve watched without Puja. I picked it because it’s about a serious social issue in India and I thought it could teach me something about the culture and it’s values. My hope was since it was about a serious topic, and not one of the standard premises of Bollywood that it would avoid some of the cliches that make some Indian movies so hard to watch sometimes.

Whatever hopes I had of that were dashed in the first scene. As the movie opens on a low angle trying-too-hard shot of a hallway, soon filled with the feet of five men walking in lockstep. We don’t see them above their waist, but given the ominous music and the ferocity of their walk, we know they are up to no good. In fact, it is very late at night and they are walking up to a student’s door, they knock and insist he let them in. They attack, strip him and humiliate him in an act of ragging.

Ragging is the British word for hazing and is used to describe the abuse across India and many other former colonies. If this movie is to be believed, however, it is more of an ongoing torment for freshers (freshman), and involves not just humiliation or physical assaults but extortion as well. One boy is even forced to do drugs, first marijuana (which looks suspiciously like tobacco), then a white powdery substance in a plastic baggie.

Our hero is Karan (Vatsal Seth), and he is indeed a “Hindi Film Hero.” He is harassed by a gang of seniors led by Feroz, a 30 year old student who keeps failing his tests in order to remain in school, where he has power and all of the perks that come with it. Karan eventually rids himself of his tormentors by doing something that I’m sure would work for anyone in his situation. He beats up all six of them when they threaten his girlfriend. This isn’t a spoiler, it’s too early in the film to be a spoiler. And it leads up to one thing the movie definitely got right. The movie starts over again halfway through with a new fresher. Only now the tormentors are last year’s tormented.

There is also much to be had in the department of character development. Karan is our main character and we learn very little about who he is. He doesn’t do things, things happen to him. When he first meets Payal, she starts talking to him when they are in the library. Then there is a cut and she is laughing hysterically. We know she is interested in him, he must be flirting with her, but what has he said? What do they click on? Why are they interested in each other?

Karan’s final actions I won’t share here as much as I would like to, I don’t want to spoil it. But it came as surprise to me that the movie would go that far. It would certainly be a huge controversy if a movie did that in this country. Movie theaters would probably refuse to show it.

So did I get what I wanted from this movie? I suppose so, mainly because I went and researched the issue on my own. I found that it can be really difficult to gauge the severity of the problems any given country is dealing with. Only a week ago I was listening to The Q (a Canadian radio show) discussing the issue of hazing in Canada and the US. When you read about ragging going on in India, from a distance, as I do from the U.S., it can sound so bad and out of control. But then I read an article from the Times of India describing our problems with hazing and it made it sound so bad over here. This is something to keep in mind whenever a controversy rises to an international level of awareness.