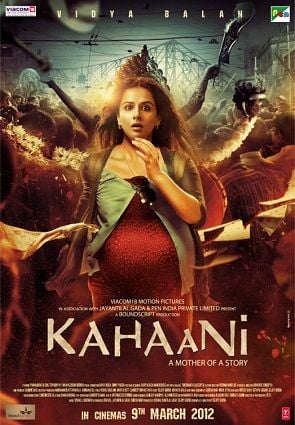 Kahaani is a pretty solid mystery thriller. It starts with a chemical terrorist attack that kills all the passengers on a particular train car. Then we cut forward two years and a pregnant woman is searching for her husband who has gone missing in Kolkata (Calcutta).

This is another strong female-centric movie starring Vidya Balan, who played the lead in The Dirty Picture. Balan’s career is quite impressive in that she has found herself in many strong female roles.
She has avoided the roles of doting housewife and damsel in distress, in favor of leading characters that refuse to be pushed down. In The Dirty Picture she was a hero in a struggle against society, here her fight is more that of a traditional action film hero. Her job is to track down and rescue her husband or perhaps to avenge him.

The climax of the film takes place on the streets of Kolkata during Durga Puja. Durga Puja is sometimes called the Carnival of the Eastern Hemisphere. It is a big, chaotic party on the streets. Shooting the film through this must have been a huge challenge, made all the more impressive because Kahaani was shot guerrilla style on a shoestring budget. The director, Sujoy Ghosh, was coming off of a major flop (Aladin), and hadn’t been able to come to terms with a studio in order to fund this movie, so he opted to do it without them. As a result, these scenes were shot during the actual Durga Puja in Kolkata, all within the chaos of the unsuspecting crowd.

Some critics in India have called the use of Durga Puja as a backdrop for the climax to be a bit obvious. But that doesn’t bother me. Durga Puja celebrates the goddess Durga and the triumph of good over evil so it is a fitting backdrop for this story of the female hero. It is also the biggest event of the year in Kolkata. But before Kahaani, not a lot of movies were shot in Kolkata.

The one problem I do have with the overall arc of the story is that it raised the issue of encounters but ultimately seemed to approve. Encounters are actions by police in India where they “encounter” criminals, such as terrorists, with the intention of killing them. They are essentially sanctioned executions without trial. Vidya is no Batman, she shows no mercy. In a movie of good triumphing over evil, that doesn’t quite feel right to me. But I know that just comes from my Hollywood moral sensibilities.