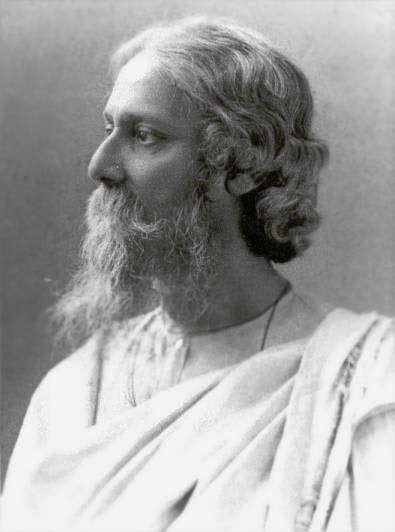 Whenever I learn about Indian history, I am always surprised by the long history of interconnectedness between India and the West. Well before America was a country, India was influencing Europe and Asia in ways that would eventually make it here.

This tradition continued in the life of Rabindranath Tagore. He was born in Calcutta (Kolkata) in 1861, during the time of the American Civil War, and died in 1941 during the second World War. This movie didn’t go into what impact the American Civil War might have had on his life, but as I learned when I went to visit the Star of India, this was a huge growth period of trade for India, as Europe could no longer reliably expect supplies from America. Tagore’s grandfather amassed great wealth with investments in coal, indigo, silk and sugar, and he established the Union Bank in Calcutta. The world’s great wars, on the other hand, would deeply affect Rabindranath Tagore.

Tagore was known primarily as an author and poet. He had such an amazing childhood, that it is no wonder he became such a successful poet and author. His family had such great wealth that every need was afforded to him. But they also insisted on his education. He greatly disliked the parochial type schools they first put him in, dropping out of four different ones before his family decided to take another approach to his education. Instead of schooling, he travelled to North India with his brother, and his brother tutored him on the great works both of Western society, and he learned Sanskrit and the great Indian texts.

Tagore published his first major work by age 16. Around this time he was composing operas integrating Western melodies and traditional ragas. He was the first to use traditional ragas in opera. In 1911 he wrote India’s national anthem, Jana Gana Mana, which is still India’s national anthem to this day. But it wasn’t until the 1920s that he was noticed outside of India, when he translated Gitanjali into English and took it to Europe. He soon got it into the hands of W. B. Yeats, who liked it so much he wrote an introduction for it and maintained a long relationship with Tagore. In 1923, Tagore was awarded the Nobel Prize in Literature mainly for Gitanjali.

But the international attention Tagore received is essentially a distraction from his remarkable life. He was born seven years before Gandhi, and was therefore a part of the same piece of Indian history. He experienced the Great War, where Indian’s fought for Britain, and he experienced the period after, when Britain failed to live up to her promises to reward India for her service. Instead, England cracked down on movements for self-rule, that culminated in the Jallianwala Bagh massacre to which Tagore responded by repudiating his British knighthood.

As a poet, he led marches and wrote protest songs. In 1903, England took a divide and conquer strategy toward Bengal and divided the state on religious lines. The the aim was to turn one side against the other. In response, Tagore repurposed that year’s Raksha Bandhan as a Day of Friendship between the East and the West, the Hindu and the Muslim Bengalis. Even if they were no longer united as one state, they would remain united for the time being, in principle. (East Bengal eventually became the country of Bangladesh).

Puja and I watched this documentary on Hulu. It was created by the Films Division of India in 1961, and produced by well-esteemed filmmaker, Satyajit Ray. Satyajit, like Tagore, was from Calcutta. The purpose of the Films Division was to “produce documentaries and news magazines for publicity of Government programmes,” in other words propaganda. But, at least in this instance, they were smart enough to hire a real filmmaker who would take a serious, crafted approach.

The film is in black and white, and some archival footage can be especially muddy, but if you are interested in the film and you find this off-putting, you should stick with it anyway. The craftsman just didn’t have the best tools in his time, but he did a fine job anyway. The movie is very watchable, although sometimes the facts and names would come too fast for my ears. The nice thing was being able to pause and talk to Puja about what was just said, and even to look things up online, such as his family tree.

In addition to producing the film, Satyajit also narrated it in English. I noticed he would speak somewhat slowly and very clearly, especially when it came to long Indian names. So I wonder if this movie was a patriotic film, directed at India’s people, or if the real target was international.

Perhaps Satyajit was saying to the world, India is a land of riches and you should be paying attention to her intellectuals. This movie came out in 1961, and India was to play a major role in the world’s social revolution of that decade. Perhaps this movie was made in anticipation of that.