“What has been your favorite part of India so far?” a friend of Puja’s asked me over dinner at an Italian restaurant in Mumbai.

An innocent question, but essentially unanswerable. We had been in Mumbai nearly a week and crammed so much into each day. A million things came to mind, Elephanta Caves, or riding the rickshaws, or “seeing where Puja grew up,” but I didn’t answer any of these. I barely hesitated. “The animals,” I said. I knew it wasn’t the sort of response she was looking for. And I had tried to think of something better but stopped myself. I’m the same guy who only days earlier had told a Bollywood radio program host that no, I don’t really like Bollywood music. Sorry. She had asked.

“The animals?” she thought for a second. “I guess there is a nice zoo.”

“No, no, we didn’t go to the zoo,” I said. “The farm animals, the street dogs, the monkeys. I love that you go to any site and there can be a goat or a cow just hanging out there.” 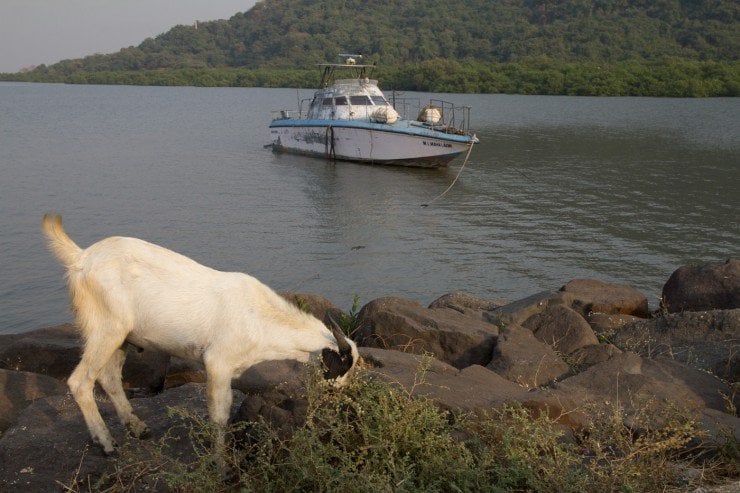 I had already made a few street dog friends in passing while we were there. Puja and her brother, AP, had often told me about the street dogs in India, and I was finally meeting them now. Pet dogs are fairly rare in India, some affluent people are growing an interest in purebreds. But for most people, pet dogs are hardly necessary, since if you want a pet dog all you have to do is go outside and pet one, he’ll be your friend for life. Feed him if you feel like it. But you don’t even have to do that. These dogs are more starved for affection than for food. The only downside is that they are kind of dirty. They live in a world of dust and automobile grease. But they aren’t as dirty as I had expected.

It’s such a strange thing to meet a dog and to realize he has a full of life of his own. He comes and goes as he pleases. His relationship with you is entirely voluntary on both sides. He plays out the natural life cycle of birth, reproduction and death, with lots of scrounging around for food in between, all independent of you. These dogs form loose packs, going about mostly in tight pairs, but with buddies linking up here and there. If you watch them closely you can see their territories, and subtle to not-so-subtle challenges passed to one another that define these territories. Sometimes you see one run up to another as if to start a fight, only to end in play.

It isn’t a perfect life for these dogs though. So many have torn skin and gashes from fights that didn’t go well. Other hobble with obviously broken limbs, most likely from poor timing in crossing a street. And without an owner, who is to repair their injuries? There are some benevolent people who will pick up injured street dogs and take them to the vet, but there are too many people in need here for such acts of kindness to happen on a meaningful scale.

Much like there are street dogs in Mumbai, there are street cows. Cows that just wander around looking for food, mostly by sifting through trash, or who just lay around in the street, like a living, artificial island that cars must drive around. The cows are the safest animals out there, because of their size and because of a well-established rule. These are the three most important driving rules in Mumbai:

The first rule is the most flexible, the third is the least. But the cows are best left alone. They are pretty comfortable with people coming close to them, as long as they don’t come too close. And most of these cows have horns. At Elephanta caves, we saw a Polish woman go up to a cow to take a picture with it. As she got close, the cow became agitated and Puja pulled her away from the cow. In this agitated state, somehow the cow had managed to get saliva on the woman’s leg, a small warning that this encounter was not headed down a friendly path. Puja told her it’s best to leave them alone and she heeded her warning from then on. It was also at Elephanta, and earlier, Kanheri caves, that we ran into monkeys. Monkeys love to hang out at tourist sites in India. People bring with them all sorts of goodies the monkeys try to get their hands on. The monkeys we saw were not too aggressive, but we also knew to keep our distance. I had one moment when I thought a monkey might be coming after me, but I left quickly and he withdrew. Monkeys can be mean if they feel threatened, or if they just want something from you. They will bite or slap, hard. 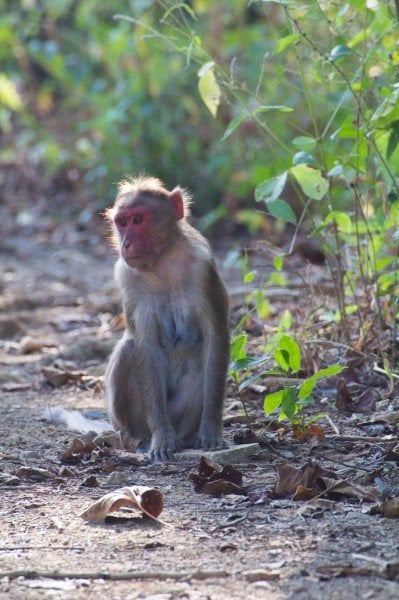 At Elephanta we watched a man get a bottle of water stolen from his hands. The monkey walked up to him and grabbed it, and he just let it go. A smart move. The monkey took it over to a nearby rock and without hesitation unscrewed the cap and drank from it by pouring the water out and catching all of the water in his mouth as it fell. Another man came by and startled the monkey while he was drinking. The monkey decided to withdraw, he picked up his bottle, holding it upright as he moved to the next rock. Only he held the bottle with the opening down instead of up and nearly all of his water poured out. 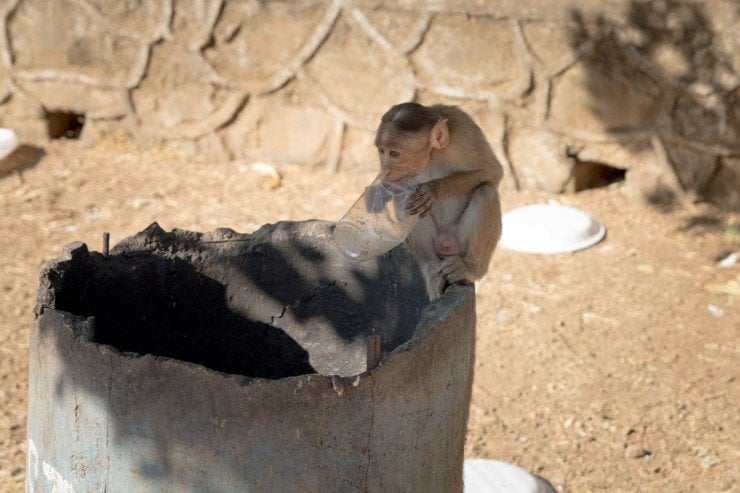 As India “modernizes” the animals are being pushed out. The monkeys in Mumbai are limited to natural preserves. And Mumbai does in fact have a dog pound that sends people out to round up the street dogs to get them off the streets. But the ones that are there have learned to hide, and they know which people will help them hide as well. There are also efforts to eliminate livestock from the city limits of Mumbai. It seems pretty clear, this integration of human and animal life that I enjoyed so much won’t exist forever.

Comments on "Urban Animals of India"