An Interview with Mandira Chauhan

This weekend is the San Diego International Kids Film Festival. One of the short films showing will be “Failure Groupies,” which explores the themes of racism and terrorism through the eyes of 12 year olds. I was very excited for the chance to speak with the film’s director, Mandira Chauhan. Mandira grew up in Mumbai just like me. She moved to New York in 2012 to become a filmmaker.

Puja: Tell me about yourself

Mandira: I grew up in Bombay and moved to NYC in 2012 to make films. I was obsessed with movies since childhood and really into the process of how films are made. I’ve always wanted to make movies and I came to a point that if I wasn’t going to do it now, when else? So I moved to New York, took a short film making course and I pretty much jumped into it!

P: Why did you choose New York city?

M: I was familiar with New York. My brothers lived here and I thought it was a great place to try something new. But my brothers moved away soon after I got there!

P: Did you grow up on Bollywood?

M: I loved western movies. I have a love/hate relationship with Bollywood movies. I didn’t enjoy the 90s movies were extremely mainstream  but in the last 10 years they’ve gotten better, more interesting, more international. I enjoy the movies that cross cultural boundaries. I love things by Anurag Kashyap and Mira Nair. They’re Indian but also very international.

P: So what movies inspire you?

M:  Steven Spielberg inspired me. I started watching his movies as a kid and they were fascinating to watch. Such a wide range of genres and sights. They were amazing. 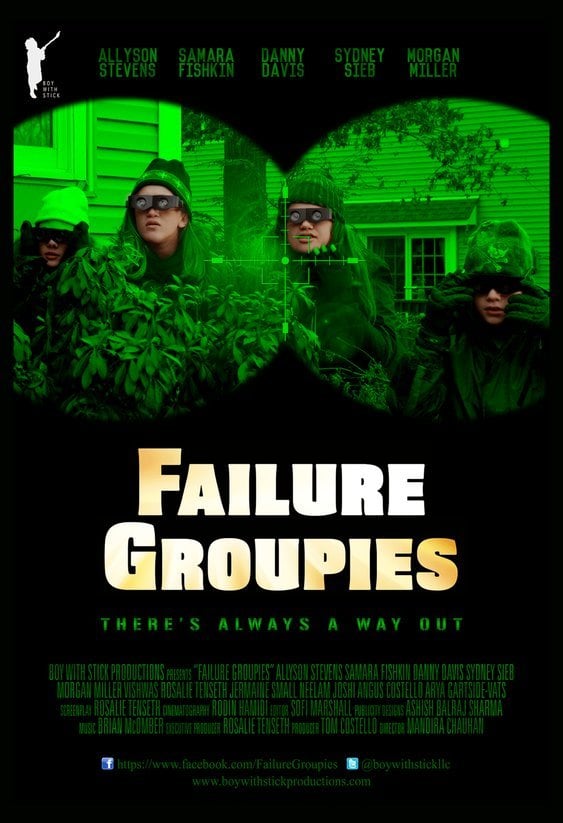 P: So how did Failure Groupies come about?

M: My earlier film, Graveyard Shift, was showing at the Garden State Film Festival and that’s where I met Rosalie Tenseth. She called me a few months later. She had been an actor in NY for over 20 years and she teaches acting to kids in New Jersey. After the Boston bombing, her kids started talking about racism and terrorism and this film is inspired by the real dialogue she had with those kids. Some of the actual dialogue in the film comes from those discussions. The film is from the perspective of 12 year old kids, which I found to be a really interesting perspective. They will be adults in a few years.

P: What were some of the biggest challenges you faced?

M: None of the kids are professionals. Rosalie has been coaching them but they’ve never worked on a professional set. I worked with the kids for several months before shooting, so they could get used to how things work on a set and get them used to the environment. They were taken aback by how much work was involved. We shot during a snow storm the weekend of Thanksgiving last year. It was an extremely tough shoot. But I am very happy with the result.

P: How long did it take to make the movie?

M: We shot it in 4 days and the editing process took 3 months.

P: How are you promoting your film?

M: I’ve been very lucky. Rosalie has been relentlessly promoting this. Festivals are great for feedback and so fun to connect with others. Failure Groupies will be showing at several upcoming festivals: The Golden Door Film Festival in New Jersey, The Fort Lauderdale International Film Festival in Florida and the First Glance Film Festival from Philadelphia.

P: Since we are mainly I food blog, I like to ask everyone this question, do you have a favorite food?

M: I could live on dosa every day. I’ve gotten a lot of people on to it. My family is always trying to tempt me by telling me that I could eat dosa everyday if I went back home to Mumbai.

P: What do you miss most about living in India?

M: Not having to worry about where my next meal is coming from. There is always someone to make sure you are fed there. My family would always take care of my meals.

Comments on "An Interview with Mandira Chauhan"