I have always loved the little vegetable patties known as tikki. Traditionally the most common ones are aloo tikki (potato patties). My mom is the tikki queen and makes many variations of them including some with paneer and greens.

The other night I had a friend coming over for dinner and less than an hour to cook it. With few ingredients in my fridge, I took a cue from my mother’s tikki experiments and pulled out what veggies I had on hand. I chopped up a cauliflower, carrots and potatoes tossed them in the steamer for 20 minutes and headed to the shower. I had a nice bunch of cooked vegetables when I got back to my kitchen ready to go.

I have to admit, I wasn’t exactly on time. I was still pan-frying the tikki’s when my friend arrived but at least we didn’t have to wait that long to eat. 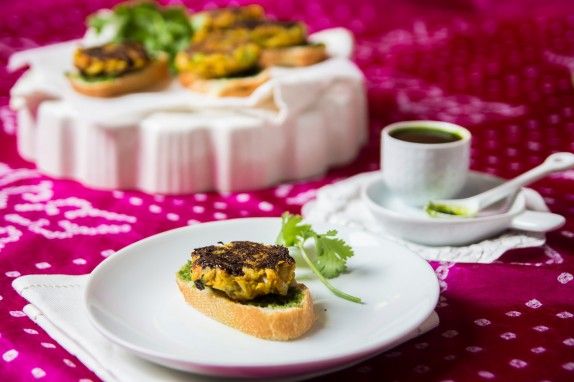 Serve with sliced baguette or rolls.

Peas are not traditional in a chutney. Steve came up with the idea a while back in an attempt to add more protein to a meal. We ended up really liking it and have made it often since.